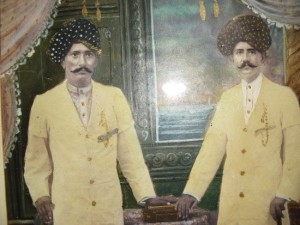 Nationalities: It was the Colonial British times in India and just over half century, who was to know that Independence was on the horizon!
Languages spoken: English, Gujarati, Kutchi and possibly African language.
Physical description: He was a tall person in stature and was over six feet tall standing, from the only painted picture available, next to his only older brother Umar who also worked with him.

Limited Education in English, but could read and work from drawings as a crafts man, but possible local language courses and studies in India in 1800's was possibly the main feature for progressing and working alongside the British or local authorities.

Trading in Clove and other trading from Zanzibar to the Middle East and Indian shores of Gujarat, worked under the British Government in building the main infrastructure of the colonial administrative buildings throughout Zanzibar and East Africa, these buildings such as, the court houses, customs and many other such government buildings are still in use by the current governments in particular location such as in Zanzibar, Mombasa, Kenya. There were other renowned crafts men who worked alongside as a team, including a Parsi and Amu Mistry (Luhar),

Both brothers travelled vastly to Arabia & Africa and from the documents attached it certainly seems that he was well established in Zanzibar and also Mombasa, Kenya, since late 1800's and had started off as a trader and later on as a contracted crafts man working for the British government in Zanzibar and also Kenya from the evidential documents.

Family structure in terms of birth dates of their children from both wives of Fakirmohamed are very odd and far apart at times due to the fact that he would have had to travel a lot, to and from Africa after spending some length of period of time in trading or business in Africa.

He would have had to visit his family back home and in those days it could take 5-6 weeks to get to India from Africa and this was also seasonal, dependent on the Monsoon winds and must have had to pre plan their return journeys in a certain way that they had to get back to Africa taking into account the wind Monsoon directions.

After a certain duration period of stay in India and getting back in time to attend their appropriate business. It was also a known fact that in the early period of the Colonial times in Zanzibar a lot of Indians did not bring their wives to Zanzibar with them but often left them home, travelled back after a while to see their loved ones in India.

1911 December Seyyid Ali bin Hamoud visited England to attend the Coronation of His Majesty King George V. Whilst in Europe he abdicated and decided to live in Paris where he died in 1918.Seyyid Khalifa bin Haroub ascended the throne of Zanzibar and his coronation was held at the House of Wonder. He was the longest Sultan to rule Zanzibar from 1911-1960.

1913 Control of Zanzibar Sultanate passed from the Foreign Office to the Colonial Office. One of many of Mr Fakimohmed's documents, this one is dated 15/03/1913 written on a Saturday and confirms that he was a foreman working in a colonial establishment for them, in this case in Zanzibar.

1914 August The first World War was started. Zanzibar declared war on Germany and the Treaty of Zanzibar with Germany lapsed.

1915 July The Zanzibar Theater Cinema House at Darajani Bridge was opened in Saturday. The first instalment of the serial Elmo the Mighty in which Elmo Lincoln and Lucile Love the beautiful and talented favourite, figure in exploits of sensation adventures was successful screened before a crowded house.

1916 August The first naval airplane to Zanzibar landed during the period of the first world. The Eastern African campaign during the War saw the novel use of aircraft in naval operations. Majority of these aircraft's had underpowered engines and wooden airframes which were prone to severe problems in the tropical climate. Sultan Khalifa bin Harbour was the first Arab ruler to view his kingdom from the air by flying the aircraft piloted by Lt. J. Cull of Royal Navy Air Service.

1917 MarchThe Darajani Bridge was opened by J. H. Sinclair, then British Resident replacing the old wooden bridge. The bridge was designed by Mr. Crawleys the Director of public work The Bridge was a connecting link between the town peninsular and the main island. The bridge was of 2 spans with a total length of 70 feet by 20 feet wide.

1918 The first motor lorry two-ton-Daimler to Zanzibar was bought by Public Works Department. It was used for the construction of various roads in the country side.

Some of the Documents:

The Majothis  (by Abdul Hamid Majothi) 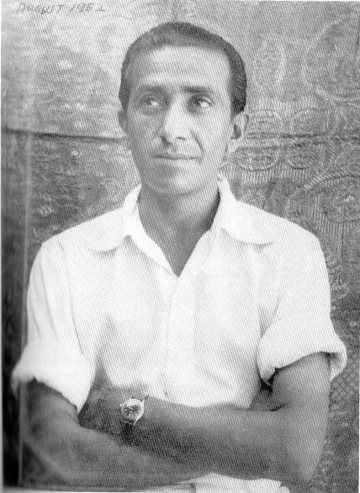 This is a brief history of our clan the Majothis, whose roots began in north-west­ern India in Cutch, which lies in the state of Gujarat. Our people resided in small towns, villages and hamlets, such as Kathiawad, Hajamchora, Jodia, Balamba, Bhuj, Dhrol, Kasia, and many other places up and down Gujarat. The Majothis along with other clans living in Gujarat converted to Islam not by the sword or co­ercion but probably through the spiritual teachings of passing Sufi preachers. We were undoubtedly Hindus before we converted to Islam. Our culture - dressing wedding rituals even the language are all heavily loaded with Hindu traditions. 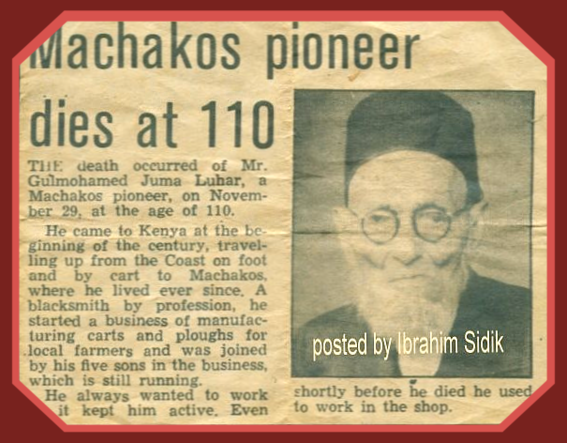 One of the Pioneers, a Mr Gulmohamed Juma Luhar at the age of 110.

Memoirs of a Muhindi..Fleeing East Africa for the West