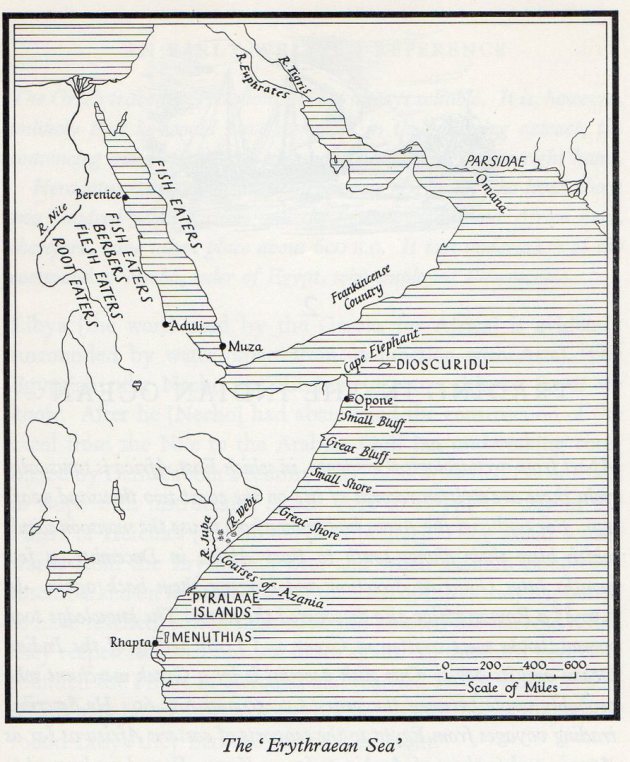 Trading in the Indian Ocean

Apart from archaeological evidence, in which East Africa is unusually rich, there are written records of life on the coast two thousand years ago. For centuries the Arabs had known how to use the monsoon winds which blew their dhows south to East Africa in December, a few months later changing direction and blowing them back again. In A.D. 45 a Roman sailor also discovered the secret. The knowledge soon spread, books were written in Greek and Latin telling of the Indian Ocean and its ports. One such account is by a Greek merchant who probably wrote between the years A.D. 50 and A.D. 60. He describes trading voyages from Egypt to the seaports of eastern Africa as far as Azania and to those of Arabia as far as Kane. From here he used to take advantage of the north-west monsoon to cross over to ports on the western coast of India. Having made careful observations and inquiries about the navigation and commerce of these countries, he wrote the best account of the commerce carried on from the Red Sea and the coast of Africa to the East Indies at the time when Egypt was a province of the Roman Empire. This account is called the ‘Periplus ’ {or guide to sailors) ‘ of the Erythraean Sea’. The term Erythraean Sea referred at that time to the whole expanse of ocean reaching from the coast of Africa to the utmost bounds of the East known to the Graeco- Roman world Place-names in this ‘ Periplus ’ are not always easy to identify with certainty. Some can be found in the map above. 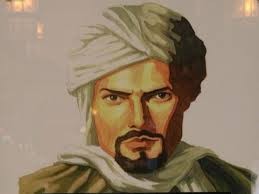 (born Feb. 24, 1304, Tangier, Mor.—died 1368/69, Morocco) Noted Arab traveller and writer. He received a traditional juristic and literary education in Tangier. After a pilgrimage to Mecca (1325), he decided to visit as many parts of the world as possible, vowing “never to travel any road a second time.” His 27-year wanderings through Africa, Asia, and Europe covered some 75,000 mi (120,000 km). On his return, he dictated his reminiscences, which became one of the world's most famous travel books, the Rihlah.

The exact founding date of the city is unknown, but it has a long history. Kenyan school history books place the founding of Mombasa as 900 A.D. It must have been already a prosperous trading town in the 12th century, as the Arab geographer Al Idrisi mentions it in 1151.

During the pre-modern period, Mombasa was an important centre for the trade in spices, gold, and ivory. Its trade links reached as far as India and China and oral historians today can still recall this period of local history. Throughout the early modern period, Mombasa was a key node in the complex and far reaching Indian Ocean trading networks, its key exports then were ivory, millet, sesamum and coconuts.

In the late pre-colonial period (late 19th century), it was the metropolis of a plantation society, which became dependent on slave labour (sources contradict whether the city was ever an important place for exporting slaves) but ivory caravans remained a major source of economic prosperity. Mombasa became the major port city of pre-colonial Kenya in the Middle Ages and was used to trade with other African port cities, Persia, Arab traders, Yemen India and China.

When a Greek author and traveller from Egypt visited East Africa about the middle of the first century of the Christian era he found the Coast and its islands already settled by Arabs who recognized the King of Yemen as their suzerain lord. According to the writings of this author in his book The Periplus Of The Erythrean Sea, those Arabs had made their settlements in East Africa for centuries before his visit, and had already mixed their blood with the local population. By this evidence it becomes clear that Arabs have been inhabiting East Africa for much more than 2,000 years (John Gray: History of Zanzibar pp 10-11). W.H. Ingrams, quoting Rev. W.A. Crabtree, writes in his book - Zanzibar Its History and Its People that about four thousand years ago Arabs, known to the ancient Egyptians as "Aamu" and "Arapin", came to East Africa. Says Ingrams

"Some of these people wandered into the interior and some followed the coast. Those that went into the interior lost their nationality and became, claims Mr. Crabtree, the origin of the Hamites. The remainder were called Arabs."

The Egyptian word "Arapin" obviously means "Arabs", but is there not an intriguing connection between the ancient Egyptian word "Aamu" for Arabs, with the name of the island of "Amu", as the inhabitants call it, Lamu being merely a corruption of the Arabic "Al-amu"? About 1400 BC. the Egyptian king Rameses II sent an expedition to East Africa. That expedition, which was manned by Phoenicians, is supposed to have reached Madagascar. King Neco of the 26th Dynasty (630-527 BC.) dispatched another expedition which rounded the Cape of Good Hope, sailed northward along the West African coast, entered the Mediterranean through the Straits of   Gibraltar and arrived back in Egypt after three years of voyaging. At each place of call these ancient men stayed long enough to sow a crop of wheat and harvest it. Records do not say, but it can well be assumed, that they must have sown and cropped children as well as grain in their ports of call, much in the same way as their descendants, the 'Soori' tribe from Oman who claim descent from the Phoenicians, have down the ages been planting seed from their loins up and down the coast, from Lamu to Zanzibar and the Comoro isles. Phoenicians (in Arabic Finiqiyyin) used to call themselves Khna or Kina'an, which is a well-known Arab tribe.

Often overlooked by visitors to East Africa, the coastal areas of southern Somalia, Kenya, Tanzania and northern Mozambique boast several ruined and extant historical towns of significant cultural importance. Although some receive an increasing number of visitors - especially Stone Town in Zanzibar and Lamu in Kenya - most sites seldom see a single soul. Places like Kilwa Kivinje and Pemba in Tanzania are notable for their remote and isolated location, whilst the city of Mogadishu has been a no go area for years due to the ongoing Somali civil war. With his brief introduction to East Africas Shirazi and Omani mosques, forts and residences, Werner Hermans intends to make a broader public familiar with the presence of world class, African monuments in a part of the continent for which it's early history is commonly only associated with colonial influence.

Map of the Swahili coast, from Jan Huyghen van Linschoten's "Itinerario: Voyage ofte schipvaert van Jan Huyghen van Linschoten naer Oost ofte Portugaels Indien, 1579-1592", engraved by Arnold Florentius van Langeren and published in Amsterdam by Cornelis Claesz in 1596. As secretary to the Portuguese archbishop of Goa, Van Linschoten had access to many top-secret Portuguese nautical maps as well as other valuable commercial information. The extensive details of coastal and other navigational points on this map are likely based on those from the portolan charts of the Portuguese, especially those by Bartolomeu Lasso. The map clearly depicts 'Quiloa' (Kilwa Kisiwani in southern Tanzania) as the most important settlement in East Africa of the late 16th century. 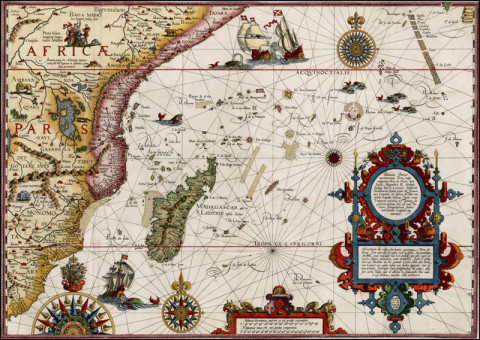 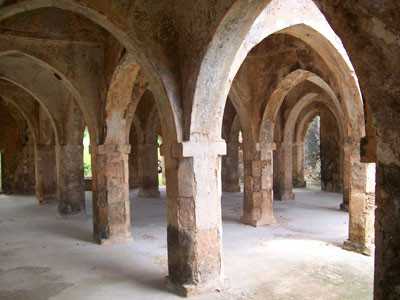 The Great Mosque of Kilwa Kisiwani was founded in the 10th century. Its large prayer hall is a later extension built in the early 14th century. The roof consists of 30 domes and vaults held up by monolithic stone pillars.

A fascinating feature of Omani architecture is the ornately carved wooden door. This tradition originates from the areas around the Persian gulf - from Afghanistan to Punjab in India - where they were first mentioned in the 12th century.

This striking example from mid-19th century guards the entrance of a house in Zanzibar. 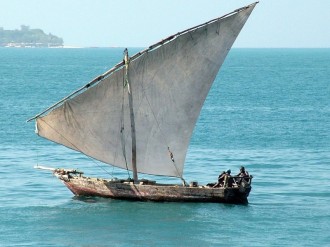 History of the Oman and Zanzibar Sultanate

There have been discoveries of Palaeolithic stone tools in caves in southern and central Oman, and in the United Arab Emirates close to the Straits of Hormuz at the outlet of the Persian Gulf. These stone tools, some up to 125,000 years old, resemble those made by humans in Africa around the same period. This is the southern route ‘out of Africa’.

Sumerians traded with Oman, and the Persian Achaemenid dynasty, controlled and/or influenced the Omani peninsula. This influential control was most likely exerted from a coastal center such as Sohar. From the 3rd century B.C. to the arrival of Islam in the 7th century A.D, Oman was controlled by two other Iranian dynasties, the Parthians (Whites) and the Sassanids. During this period Oman's administrative name was Mazun. By about 250 B.C, the Parthian dynasty brought the Persian Gulf under their control and extended their influence as far as Oman. Because they needed to control the Persian Gulf trade route, the Parthians established garrisons in Oman. In the 3rd century A.D, the Sassanids succeeded the Parthians and held the area until the rise of Islam four centuries later. This agricultural and military contact gave people exposure to Persian culture, as reflected in certain irrigation techniques still used in Oman.

Only once in its history has Zanzibar had a leader rule for more than 25 years.
There has only been one Zanzibar Silver Jubilee. That of: Seyyid Khalifa bin Haroub bin Thuweini bin Said bin Sultan. 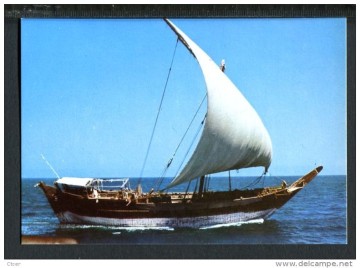 Yemen i/ˈjɛmən/ (Arabic: اليَمَن‎ al-Yaman), officially known as the Yemeni Republic (Arabic: الجمهورية اليمنية‎ al-Jumhūriyyah al-Yamaniyyah), is an Arab country located in Western Asia, occupying the southwestern to southern end of the Arabian Peninsula. It is bordered by Saudi Arabia to the north, the Red Sea to the west, the Gulf of Aden and Arabian Sea to the south, and Oman to the east.

Yemen is one of the oldest centers of civilization in the Near East.[5] Its capital and largest city is Sana'a. Yemen's territory includes more than 200 islands, the largest of which is Socotra, about 354 km (220 mi) to the south of mainland Yemen. It is the only state in the Arabian Peninsula to have a purely republican form of government.[6] Yemen was the first country in the Arabian peninsula to grant women the right to vote.[7] Yemeni unification took place on 22 May 1990, when North Yemen was united with South Yemen, forming the Republic of Yemen.