A SHORT HISTORY OF NYANZA

Nyanza Province takes its name from Lake Victoria (Victoria Nyanza), and includes, roughly, all that part of Kenya from which the drainage flows into the lake. It is bounded on the north by Mount Elgon, on the east by the Nandi Hills, and on the west by the lake. On the south there is no natural frontier; the boundary between Kenya and Tanganyika was fixed in 1885 by an agreement between Britain and Germany. At that time no one in Europe knew much of the geography of East Africa, and the border between the two countries was made by drawing a line on the map.

Almost all of the people of Nyanza consist of two tribes. The Joluo live in the low-lying country around the lake, and the Abaluyia live in the higher land inland. The Abagusii and related tribes in the south are connected by language and customs with the Abaluyia. They belong to the Bantu race and are connected more or less distantly with the Baganda, Agikuyu, Akamba, Waswahili, and many other Bantu peoples of Africa. The Joluo, on the other hand, are of the Nilotic race, which is so called because most of its peoples are connected with the river Nile. Their nearest related peoples are the Acholi, Alur, Jopadola, Jopaluo, and other tribes who live in Northern and Eastern Uganda and Southern Sudan.

These tribes have mostly been peaceful farmers and stock breeders, and, until European control was established, they were all frequently raided by the more warlike peoples living in the hills to the east. These peoples, who are closely related to one another, are the Nandi, living opposite to North Nyanza; the Kipsigis, living opposite to South Nyanza; and the Masai of the Uasin Gishu district where Eldoret now stands, living opposite to Elgon Nyanza. They not only raided everywhere but also settled in some places. In the country of the Abaluyia their settlements are represented by a number of place-names in the Nandi language, such as Kakamega, Kakalelwa, and Kaimosi. Of these places, Kaimosi is practically on the border of Nandi country, but Kakamega and Kakalelwa are more than twenty miles away.

Avandu Vosi - A Peek At Early Customs Of The Luhya

Not much has been recorded about the early history of the Abaluhya, who some early explorers refer as the Bantu Kavirondo.

But one thing is clear, the Abaluhya had diverse chiefdoms or Kingdoms that had distinct names. So it should not be a surprise that we have Bukusus, Tirikis, Maragolis, Isukhas and so on today.

And, to a large part, they are in the aggregate the washemeji of the Luo, considering these two communities have for many years shared cultural similarities, and intermarriage.

In this post, I will, except where practices of a particular sub tribe are cited, write about the Abaluhya collectively. All images here are of, or about, the Abaluhya.

There were NO demarcation lines, the Europeans started coming into the hinterland around the late 1800's.
According to Erdhart and Rebmann Lake area was called D’uniamesi au D’ukerewe
This is how they saw things through talking to locals and their findings (Slug Map).

Therefore what they the locals called the geographical areas or lakes has no significance or limits to the geographical demarcations lines or country/countries that we know and see today...

The word Nyanza, is Bantu word for Lake... 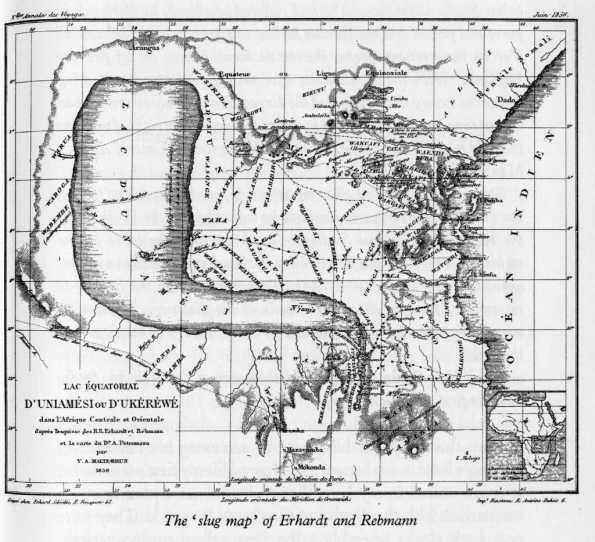