This is a story about a famous British Plate-Layer Engineer R.O Preston from India that has enlighted us all over time, on this particular occasion through his daily recording of Nyanza Railways/Uganda Railways laying of railway tracks that he Constructed as an Engineer with Uganda Railway.

Here is one of his fascinating journey below that was recorded and published by Mr R.O Preston.

THE GENESIS OF KENYA COLONY

Reviewed in the United Kingdom on 18 January 2013

This book was first published in 1947, has 304 pages, 52 B/W photos, numerous interesting B/W adverts through-out this book and 1 map of Kenya, and was originally sold for Shs 5/-.

The book was printed by Mr S B Horra, proprietor of Colonial Printing works, Duke Street, Nairobi, who came to BEA(British East Africa) on 13.4.1900, as an employee of Uganda Railways. The book is dedicated to author's mother. This book narrates reminiscences of an early VICTORIA NYANZA RAILWAYS (Uganda Railways) construction pioneer, who wrote daily notes in his diary, with all the various incidents that occurred.

The book starts when R O Preston received a cable on 1.1.1897 and sailed from BOMBAY in s.s.'NOWSHERA', with 300 Punjabi, to Kilindini, MOMBASA. Preston had worked for 11 years in Indian Railway Construction. He was instructed to proceed to the railhead, to take charge of plate laying, which he did on 3.2.1897.

The main problem was supply of water. They reached MAJI CHUMVI river and the men went down with malaria. After building a bridge over Maji Chumvi, they moved onto SAMBURU and TARU station in May 1897. The Indian workers cutting the bush suffered a lot. Fresh water was available on 28.9.1897 at VOI river and then at TSAVO river camp.

This place had a bad name for humans disappearing. Then the man-eater lions struck. They were all relieved to reach MTITO ANDEI station. Malaria struck again at KIBWEZI and at KIBOKO stream. Preston was poorly too. Trains were de-railed due locusts, caterpillars, termite ants and guinea fowls!

At SIMBA (fresh air camp), they heard lions roaring every night.
There were over 1000 men at any time at the railhead, under over 300 bush tents. They had a beautiful view of Mt KILIMANJARO. As the Sultan of Zanzibar came to visit the railhead, the next station was named after him - SULTAN HAMUD.

Passing Simba, Kima, Kapiti Plains, they arrive at ATHI Escarpment on 17.5.1899. In May 1899, NYROBE (Nairobi) was "bleak, swampy, windswept, devoid of humans, full of wildlife and unsafe at night". Now Preston and his men were told to move on as departments were moved from Kilindini to Nairobi.

So the trains were loaded with Indian labourers to FORT SMITH (Kabete) and KIKUYU stations. Christmas Day 1899, was spent in Kikuyu Highlands, at 7,500ft and 360 miles from coast. It was Preston's 3rd year in British East Africa.
Building the rail down incline, they passed Mt Longonot (9,100ft) and Mt Suswa (7,700ft), watching Lake NAIVASHA on 3.5.1900. From GIL GIL station, the line runs between Mt El Donyo Eburru (Mountain of Smoke) and Lake Elementeita. Then onto NAKURU, NJORO and MAU Escarpment with its 27 viaducts. From Mau Summit(8,700ft), the line drops 5,000ft in 100 miles, passing LONDIANI, Fort Turnan, Muhoroni, Kibigori and finally the LAKE VICTORIA.

This is a beautifully written book with an on-the-spot account by R O Preston. Enjoy reading the fascinating very old adverts, which tell their own story.

RONALD OWEN PRESTON was born on 17.12.1867 in India, where his father was employed in the PWD. While in Liverpool, England, his father 'DAVID' disappeared and after the death of his mother 'EMMA JANE', Ronald 11 years and his sister 14 years, were moved to Madras, India. Ronald went to BEA as a construction engineer on Uganda Railways in 1897. He married 'FLORENCE CLOTILDA' and they had 3 children, RALPH, LEON and PEARL. Florence stayed with Ronald for the entire 581 miles of railway line construction. 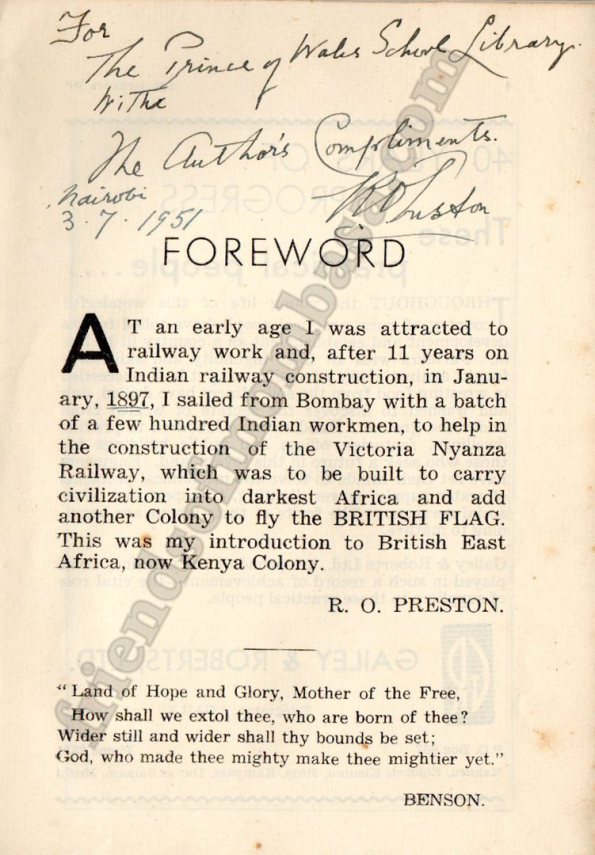 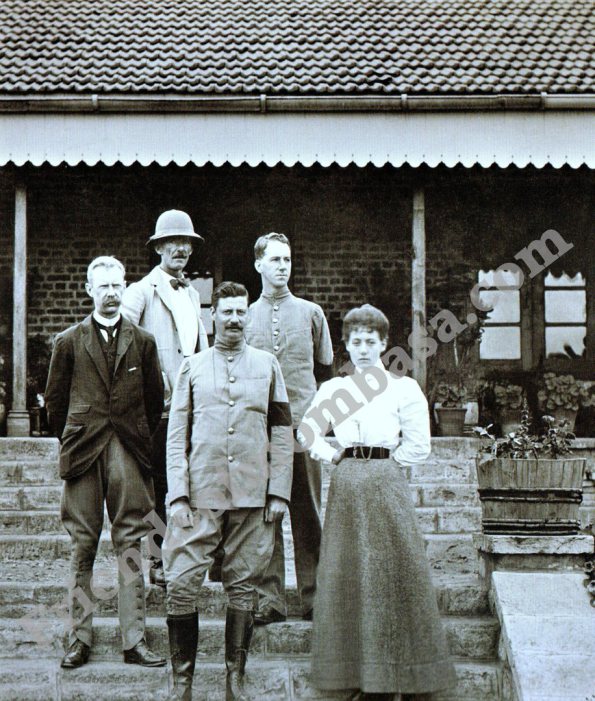 Commander Benjamin Whitehouse, R.N., surveyor of the Victoria Nyanza (Lake Victoria) for The Uganda Railways and brother to George Whitehouse: Claud Hollis, Personal Assistant to the Commisioner of the East Africa Protectorate (Both at the back)

George Whitehouse, appointed engineer-in-chief of the Uganda Railway in 1896.He was knighted by King Edward v11 in June 1902 and retired the following year: Sir Charles Eliot Commisioner of the East Africa Protectorate from Dec 1900 next to him.
The lady on the right is George Whitehouse's wife, Florence....(Kisumu was named after for a brief period) and not R.O Preston's wife Florence who drove the last sleeper key  on December 19th 1901 at the edge of Lake Victoria to mark the end of the Uganda Railway Project on land. 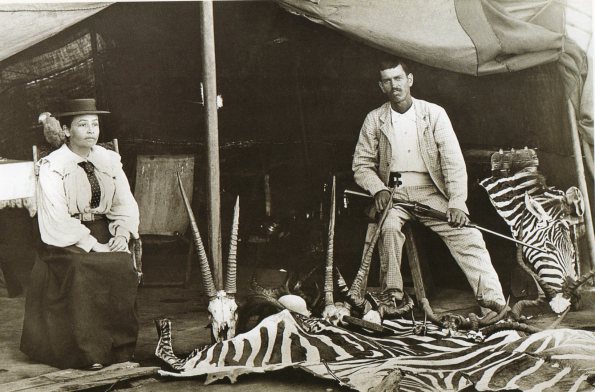 Ronald and Florence Preston sitting outside their tent, which was their mobile home for five years.

Profession: Construction Engineer with Uganda Railway. After leaving Railway he worked in a Draper's store in Nairobi. On retirement became an author of some ability