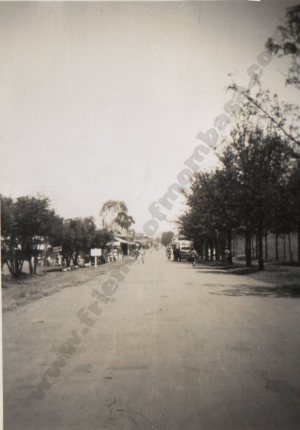 RIGHT in the middle of Kenya’s settled area, one hundred and ten miles by road from the capital city of Nairobi and a little more from Eldoret and Kisumu, Nakuru can well claim to be the agricultural centre of the Colony. Here is the headquarters of the Kenya Farmers’ Association which handles the produce of well over half the farming population of the Colony, whilst the controlling bodies of most of the agricultural industries such as the Co-operative Creameries, the Pyrethrum Board, the Wheat Control Board and the Flax Board, hold their periodical meetings here.

The town itself lies at an altitude of just over six thousand feet, the actual height of the railway station being six thousand. and seventy-one feet, whilst in spite of the fact that it is within twenty miles of the Equator, the average mean shade tempera­ture taken over a number of years is 65° Fahrenheit with an average shade temperature of 75°.

Eleven o’clock in the morning; on any Friday in Nakuru and Donald Avenue, the town’s Oxford Street, is crowded with cars and people talking, shopping and darting in and out of the clubs and hotels. This is farmers day bringing the settlers in from Njoro, Rongai, Molo, Gilgil, Solai, Subukia. Elmenteita and even further afield for their weekly marketing, and some­times it takes half an hour to walk the length of the short shopping area, so many are the friends and acquaintances who stop for greetings and a chat.

Towering over the little town, but far enough away to prevent overshadowing it, is the famous Menengai Crater. This crater is nearly thirty-four miles square in extent and is one of the largest in the world. A trip to the summit is an easy feat these days in a modern car. It is a long pull and a strong pull, but well worth doing, as the view from the surprisingly level plateau at the top can be surpassed in few places in Africa.

One story however of the crater is true, and that is that at the end of the last war an enterprising land office marked it out into farms for soldier settlers. Needless to say none of them were ever taken up!

Immediately below the town lies lovely Lake Nakuru, normally covering an expanse of nearly twenty-six square miles. Unluckily of late, partly as the result of drought years and partly it is to be feared because of the disastrous effects of deforestation on the banks of the rivers which used to flow into it, the water has dwindled to an alarming extent, and for a few months in the driest period of an abnormally dry season, last year, it was practically empty.

This state of affairs had not been known before in the memory of the present generation, but the equivalent of the “ oldest inhabitant ” among the natives says that “ samani sana ” (long ago) it was also dry, and the remains of the tree stumps well into the centre of the Lake confirm this story. Since the advent of the rains this year the lake has filled up again and the flamingoes are back once more like lovely pink clouds on the surface.

Nakuru was the first township outside Nairobi to take upon itself the responsibilities of local self-government, and for the past ten years or so the affairs of this enterprising community have been ordered by a body known as the Nakuru Municipal Board.

All three banks operating in the Colony have branches here and their offices are amongst the most substantial build­ings in the town. The shops are adequate and up-to-date and there are two large and flourishing motor firms.

The town is very fortunate in possessing a modern school for boys and girls, the buildings lying on the slopes of Menengai some two miles east of the township in a particularly healthy position. The site is magnificent with a wonderful view over Lake Nakuru to the mountains beyond.

The accommodation of the school is of a very fine type with excellent provision as regards baths, showers and sanita­tion. There is even a swimming bath, one of the very few in the Colony and the pride and joy of every smallest pupil. The school reserve consists of 94 acres and in front of the buildings and overlooked by them are extensive playing fields which one day should develop into one of the finest sports grounds in the Colony.

Nakuru for its size is adequately supplied with churches. The Church of England, St. Christopher’s, is a charming little building standing in a couple of acres of ground just outside the centre of the town with the chaplaincy nearby.

The Roman Catholic community have a substantial church on the way down to the lake which was consecrated about eleven years ago as Our Lady of the Rosary. Two Masonic Lodges have their headquarters here and the Masonic Temple completed in 1924 is probably the finest in the Colony outside Nairobi.

The Nakuru War Memorial Hospital really deserves a page to itself, such an invaluable boon it has been to the people of the district. Founded in 1919 by the settlers of the Nakuru district as a memorial to their comrades who died in the Great War, it has grown steadily through the years from its com­paratively small beginnings into the splendid institution it now is.

Standing in its own pleasant grounds at the eastern end of the town, this dignified grey stone building with its wide verandahs, its new and up-to-date maternity annexe, and really delightful quarters for the nursing staff, also newly built, is a part of Nakuru in which every member of the town and every settler feels a certain proprietory pride.

Twenty-five and even thirty years ago the traveller through Nakuni could always be reasonably certain of finding a bed- Nakuru Hotel opposite the railway station is one of the oldest hostelries in the country. He can still find his way there, and his bed, though he would hardly know the old building as it is to-day, so expensive are the renovations and improvements that have taken place.

There is also another hotel, right in the centre of the main street, known as the Stag’s Head. This also started in a very small way as a little wayside inn. As the demand grew the hotel grew with it, and finally a year ago tremendous additions and alterations were made and the hotel took on an absolutely new appearance. It is now an imposing white building with a broad green verandah running nearly its full length and its four luxury suites and twenty-eight comfortable bedrooms are nearly always full.

Indoor amusements are not by any means neglected in the township and an adequate cinema shows all the latest films.

There is an amateur dramatic society, a chess club and a very flourishing and attractive little public library near the station run entirely by the enterprise of the local community.

Nakuru is particularly fortunate in its water supply, and whilst in less favoured towns this is sometimes a cause for anxiety, here there is an ample supply for any possible or probable needs. The water comes from the Mereroni River and is conducted by five inch pipes from the reservoir one and a half miles outside the township border. Needless to say the town is lighted throughout by electricity and all the business houses and many private residences are “ on the ’phone.”

The Nakuru district as far as sport is concerned, is certainly as well equipped as any other part of the Colony. Racing, fishing, polo, golf, tennis, squash, hockey and even rugger are all available and any or all of these amenities can be indulged in without too great a strain on the pocket book.

Perhaps the Rift Valley Sports Club, one of Nakuru’s most beautiful buildings, deserves pride of place. Built about twelve years ago at a cost of nearly £20,000 the Rift Valley Club is situated in the heart of the town on a beautiful site overlooking the lake, surrounded by extensive grounds. The Club is a residential one with a membership of about four hundred and has sleeping accommodation for twenty-four people. It has six tennis courts and a fine squash court.

About two miles out of the town, on the gentle slopes of Menengai, is the Golf Club, another result of local enterprise. After many false starts the golfers of the district acquired the land on a long lease from the Crown and a very pleasant and golfable eighteen holes were laid out. By many this is con­sidered to be one of the best courses in the country and the club house is a pleasant and cheery spot in which to play off the nineteenth hole.

Tennis, cricket, hockey, rugby and soccer are all played at the Nakuru Athletic Club, right in Nakuru township. This has a large and energetic membership with probably more young members than any other club in the town, and a very ambitious programme. At the time of writing more tennis courts are under construction and there is talk of a really fine building to replace the rather temporary clubhouse where members fore­gather at present.

Polo flourishes up and down the Rift Valley, and the Nakuru Polo Club, a small but enthusiastic collection of sportsmen, most of whom are now wearing khaki and scattered far and wide over the Colony, can hold their own with most up-country teams. The polo ground is on the race course and in times of peace the club holds a popular annual gymkhana and polo tournament.

The Nakuru Race Club, under very able management, provides fine sport for the racing community, and the Nakuru two-day Spring and Autumn meetings are famous all over the Colony. There are one or two very successful local stables and the whole district and perhaps Njoro in particular, is con­sidered an excellent part of the world for breeding.

On race days Nakuru indeed  goes gay.” Every room at the Club and at both hotels is booked for weeks in advance and every hostess within miles entertains a house party. The racing community from Nairobi turns up in a body and keen punters make the journey from as far as Sotik on the one side and Nanyuki on the other. The course looks fresh and green after the rains, the Club stables are crowded to capacity with neighing beasts and their attendant syces, the ladies exchange their farming slacks for charming gowns and picture hats and—in brief “ We’re off to the races!”

The Nakuru Show Ground in peace time, though smaller than that of Nairobi, is the second largest in the Colony and agricultural and flower shows are held here on alternate years with Nairobi.

This story traverses through118 years, it starts about an honest human being who is courageous, determined, resilience with built in endurance leaving his family and his ancestral home penniless, for the very first time in his life and geneses onto a land that is different culture and habitants to his own and builds his own empire.

Seth Ibrahim Karimbux an uneducated man who rubs shoulders and is also on par in every way with the colonial Elite, so how does an outsider from another continent, who is of different race and culture fit into all that and also surpasses all expectations in revelation?

Later on in life, he loses both of his pillars in his two sons at a very early age in life, but somehow continues with his quest with his vast empire, how does he do that?

The rest, I shall leave to the readers to enjoy through unfolding its journey and actually shadowing its ups and downs and feeling the emotions of its tale. 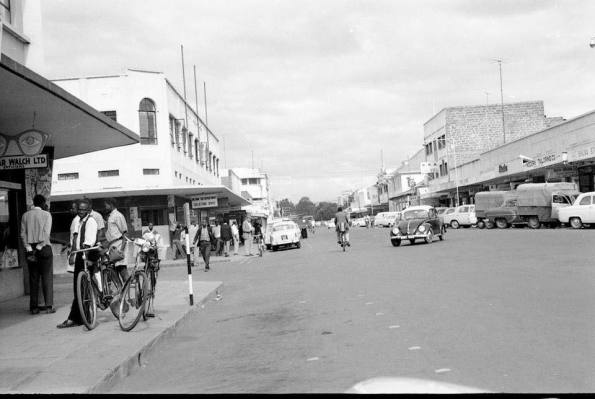