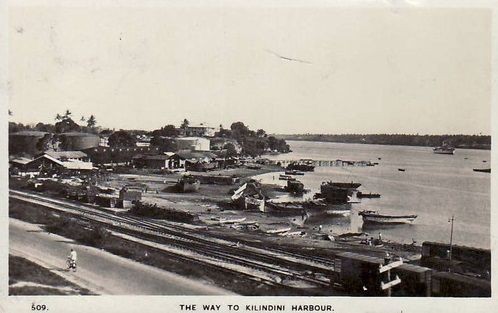 The Port of Mombasa lies on a coralline island linked by causeway, ferry, and bridge to Kenya’s mainland. In a bay off the Indian Ocean, the Port of Mombasa is a contemporary deep-water port and a market for Kenya’s agricultural products, much of which is exported along with products from Uganda and Tanzania.

Local oral history credits the founding of the Port of Mombasa to two rulers. The Mkisi dynasty ruled the area until it was conquered by Shehe Mvita who established his own town on Mombasa Island. The Swahili Twelve Nations (Thenashara Taifa) still tell the story of the change in dynasties, and they are the keepers of Swahili traditions. Mvita was a highly-educated Muslim, and most Mombasa natives identify more with his culture than with the original Swahili culture.

In the 16th Century, Portuguese writers contributed most of what the Western world knows about Mombasa. However, Moroccan historian Ibn Battuta visited the Port of Mombasa for one night in 1331, and he noted the peoples’ religious and trustworthy Muslim nature.

In the late 19th Century, the Port of Mombasa was the center of a plantation society that depended on slave labor, although ivory caravans were still the main economic contributor.

In the early 16th Century, the Sultanate became independent of Portugal, naming itself Mvita (Swahili) or Manbasa (Arabic). However, the Portuguese attacked again in 1528, and later trying to establish a colony by building Fort Jesus in 1593. The Port of Mombasa became a formal Portuguese colony under Goa in 1638.

In 1698, the Sultanate of Oman ruled the Port of Mombasa, but it was placed under the authority of Zanzibar, spurring rebellion by locals. Three different Governors ruled for Oman from 1968 to 1728. In 1728, the Portuguese returned once more, only to be drive out again by Oman in 1746. In 1746, the Omani governor declared independence to the distress of Oman.

For two years (1824-1826), the Port of Mombasa was a British protectorate until Omani rule was restored. In 1837, the Sultan of Zanzibar annexed the Port of Mombasa. The old Portuguese Fort Jesus was renamed the Fort of Isa for Shaikh Isa Bin Tarif, and his politically-important tribe swung in alliance between Qatar and Bahrain.

The Kenya Ports Authority is responsible for managing and operating the Port of Mombasa. In an excellent strategic location on Kenya’s central coast about half way between the Port of Durban in South Africa and the major Middle East ports, the Port of Mombasa is a gateway to East and Central Africa. It has been the hub for international trade in the region since it was developed under British rule in the late 19th Century.

The Port of Mombasa is Kenya’s busiest and largest seaport, serving the hinterland by exporting important agricultural products and supporting the foundation of the Kenyan economy. In addition to serving Kenya, the port serves countries in inland Africa like Uganda, Tanzania, the Democratic Republic of the Congo, Southern Sudan, Rwanda, Sudan, Ethiopia, and Somalia. Inland transportation is provided by truck and train, and special railtainer services operate from the port to inland container depots.

The Port of Mombasa has a wide variety of shipping services that travel to important destinations worldwide, including Western Europe, Asia, the Americas, the Far East, and of course the rest of Africa. Regular feeder services operate between the Port of Mombasa and Dar-re-salaam, Mogadishu, Durban, Salalah, Djibouti, and Dubai.

The Port of Mombasa is fully equipped to service a variety of cargoes from dry bulks (like fertilizers, grains, soda ash, and cement) to liquid bulks (like crude oil and petroleum products) to bagged products (like coffee, sugar, tea). The port is also equipped to handle breakbulk (timber and iron and steel), motor vehicles, machinery, and containerized cargo.

As in many ports around the world, containerized cargo is the fastest growing category, and the Port of Mombasa has a dedicated terminal equipped with ship-to-shore gantry cranes and a complete line of support machinery. Because the existing facility has reached its maximum operating efficiency, the Port of Mombasa is building new container berths and a second container terminal.

The Port of Mombasa also has five container berths with a total length of 964 meters.

Containerized cargo represents about 70% of the Port of Mombasa’s total cargo volume, and that volume is growing at around 12% per year. The Port of Mombasa Container Terminal began operating in 1979. This purpose-built facility has three berths and four 40-ton gantry cranes. In 2005, the Port of Mombasa handled 436 thousand TEUs, and it anticipates that volume to reach one million TEUs by 2015. The KPA is making improvements designed to reduce dwell time and raise terminal capacity. One such improvement is the new information technology system for documenting procedures and shortening turn-around times for ships, trucks, and trains. A new facility in the terminal has an office that accommodates staff from container operations, customs, port police, and KPA security.

The Port of Mombasa operates Inland Container Depots (ICDs), dry ports for handling and storage of containerized cargo and empty containers. This service gives inland customers faster, more reliable service. KPA owns and operates three ICDs directly linked to the container terminal in Mombasa by rail. They are in Nairobi, Kisumu, and Eldoret.

The Port of Mombasa’s ICDs bring port services closer to their customers and decongest the port container terminal facilities, thus reducing dwell time and increasing container turn-around time. The use of rail to move the heavy containers minimizes road damage and protects the country’s roadways. The ICD Nairobi is near the Port of Mombasa’s industrial area. Built in 1984, it has a 99 thousand square meter stacking area and can handle 180 thousand TEUs a year.

ICD Kisumu was built in 1994 to serve the lakeside Kilbos road area. Serving as the last stop before reaching the Uganda border, it is key to the services the Port of Mombasa provides to inland countries and handles more than 75% of the traffic destined to Uganda through the Port of Mombasa. With stacking area of 25 thousand square meters, the ICD Kisumu can handle up to 18 thousand TEUs of containerized cargo each year. Shippers can choose from ferry connections across Lake Victoria to Jinja, road transport through the Busia border point, or ship from Kisumu to the lake port of Mwanza in Tanzania.

While the ICD Eldoret was finished in 1995, it is not yet operating. Part of the facility is being used by Moi University for their parallel degree programs. Located in the Great Rift Valley near rich agricultural lands, the facility should be opened soon. It will expedite the movement of cargo to Uganda and Southern Sudan. The ICD Eldoret offers 18 thousand square meters of stacking area and can handle 25 thousand TEUs of containerized cargo per year.

Bulk cargoes in the Port of Mombasa include cement and fluorspar, soda ash, grain and agribulks, and oil. A dedicated 1968 facility at the Mbaraki Wharf is operated by the Bamburi Cement Company where cement and fluorspar are loaded for export. The Magadi Soda Company handles exports of soda ash at a dedicated facility that was originally built in 1920. The company leases, and must maintain, conveyor and sheds from the KPA. With growing demand for soda ash, the company is upgrading the facility and building a new rail quayside siding.

The Port of Mombasa moves a lot of bulk grain and agribulk. Most of the bulk grain unloaded in the port moves through a new state-of-the-art terminal that has capacity to unload 600 tons per hour. The terminal is one of Africa’s most modern, and it is operated by Grain Bulk Handlers Ltd. (GBHL). The facility handles several dry bulk cargoes: barley, malt, sorghum, soya beans, rice, maize, wheat, and fertilizer. Imported foodstuffs (barley, rice, malt, and soya beans) come in bags and containers, and they are also handled by GBHL. The company operates silos outside the port area with a modern conveyor system to transport grains to the storage areas.

The Port of Mombasa has a new multi-purpose terminal, an extension of the Mbaraki Wharf, for handling bulk cargoes and petroleum products. Available to all port users, the facility is operated by a third-party developer. Two bulk cement berths total 315 meters long and are equipped with three silos with capacity for six thousand tons each. Further, the Port of Mombasa has two lighterage and dhow wharves of 412 meters in length with nine handling points, one explosives jetty, and two dhow jetties in the Old Port.

The Kenya Ports Authority (KPA) has a Maritime College in the Port of Mombasa that provides specialized training to KPA staff and the larger community. The KPA founded Bandari College (the name means “seaport”) in 1980 to train its staff, from senior management to dock workers.

However, its success has been proven in that many more national and international students have registered. Bandari College’s contemporary building on Mombasa Island is frequently used to host international and regional conferences, workshops, courses, and seminars. Courses offered for KPA staff include port operations, technical support, administration, management, and marine activities like tug-mastering and operating forklifts. After completing a nine-month course, students receive a certificate in maritime studies which can be applied later for a diploma.

The Port of Mombasa’s shipyard provides ship repair services through the African Marine and General Engineering Company Ltd. (AMGECO), one of the largest such firms in East Africa. Its 180-meter long dry dock can handle vessels to 20 thousand DWT, and it has another 40-meter building dock for vessel conversions. AMGECO provides berthage for floating repairs and tow slipways for small vessels. The facilities contain a range of workshops that can handle all types of tasks. They also have a certified life-raft station and can offer a variety of rescue and safety equipment.

The KPA is a member of the Cruise Indian Ocean Association made up of tourism boards and port authorities from Eastern and Southern Africa. This organization strives to market the region as an attractive cruise destination with many exciting tourist attractions. KPA plans to convert two existing berths into a state-of-the-art cruise complex with airport-style facilities, lounge areas, restaurants, souvenir shops, and reception counters for passengers and cruise operators. 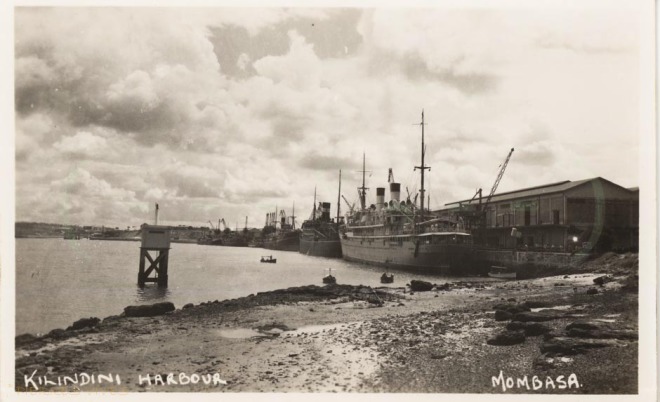 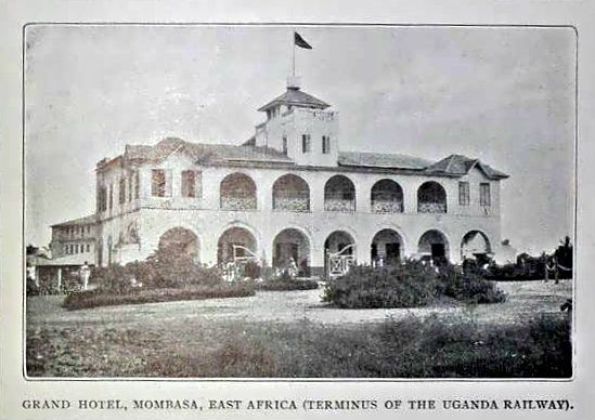 The only hotel in Mombasa during the period that was the 1890’s was the Grand hotel (which was said to be grand only in name but not in stature.) It was owned by a Greek man named Dallas. The story of one Mr. Dallas is however short and sadly unfortunate. One time Dallas was on his way from Voi to the German station in the Kilimanjaro district, when he lost his way and before he had any chance of finding it, died of thirst.

The grand hotel was a double storied building that stood opposite the statue of Sir William Mackinnon (first president of the Imperial British East African company).