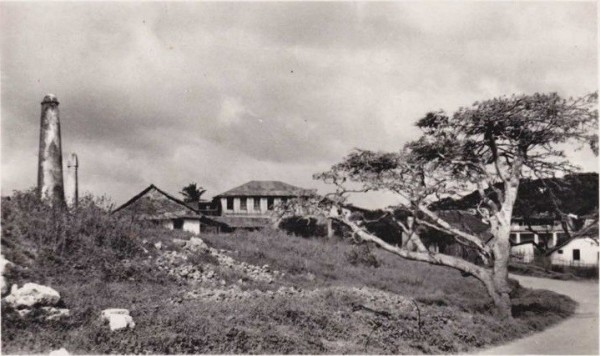 Neither Arabs or Africans consider those pillar tombs to be phallic but it's kind of hard not to. They are said to have originated in Somalia and were undoubtedly a nod to fertility rites of some sort. The Galla tribe from Somalia took over the mainland Swahili towns in the 17th century, but how these pillars came to be grafted on to Muslim tombs is still a mystery. This one is right next to Malindi's Friday Mosque.

Malindi is a town on Malindi Bay at the mouth of the Galana River, lying on the Indian Ocean coast of Kenya. It is 120 kilometres northeast of Mombasa.

Malindi is served with a domestic airport and a highway between Mombasa and Lamu. The nearby Watamu resorts and the Gedi Ruins (also known as Gede) are south of Malindi. The mouth of the Sabaki River lies in northern Malindi. The Watamu and Malindi Marine National Parks form a continuous protected coastal area south of Malindi. The area shows classic examples of Swahili architecture.

Malindi is home to the Malindi Airport and Broglio Space Centre. The town began as a Swahili settlement in the 14th century. Many remnants of Malindi’s colourful past still can be seen. Malindi is a melting pot of ancient and modern culture, it is also a very popular tourist destination, with numerous resorts, restaurants, markets and a host of activities for holiday makers visiting the region. 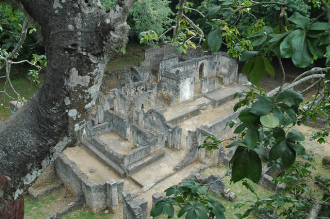 The thirteenth century was one of turmoil. The crusades were in full swing, the Mongol empire under Ghengis Khan swept forever westwards while Marco Polo turned his own eyes towards the east.

Meanwhile in Kenya, East Africa, a group of enterprising people began to build a settlement which would endure for over three hundred years. Gedi, a sophisticated coral-brick built town belies the perception many have about this part of Africa - and its architecture - before the arrival of Europeans. Take a look at Kenya's hidden history revealed.

Gedi is one of Kenya's great unknown treasures, a wonderful lost city lying in the depths of the great Arabuko Sokoke forest. It is also a place of great mystery, an archaeological puzzle that continues to engender debate among historians.

To this day, despite extensive research and exploration, nobody is really sure what happened to the town of Gedi and its peoples. This once great civilization was a powerful and complex Swahili settlement with a population of over 2500, built during the 13th century. The ruins of Gedi include many houses, mansions, mosques and elaborate tombs and cemeteries.

Despite the size and complexity of this large (at least 45 acre) settlement, it is never mentioned in any historic writings or local recorded history.

One day, someone is going to take a pickaxe and go to Gedi. He’ll probably dig down a couple of feet or so, and find a pot, or a coin. And with the find will go all our vague imaginings and romantic conjecture. It will be a pity, in a way, for the place is still spoken of in whispers and the tales of spooks and silent tombs send shivers along folks’ spines. We tell and listen to the stories with the same thrill as we listened to ghost stories when we were young.

We think that the bits and pieces to be found will be of Persian origin. For there are many signs of Persian influence in East Africa. The Swahili are supposed to be descend­ants of the race. There are old unusual names which are or may be Persian. On a little island near Mafia is the old place of Kua. It looks much like Gedi. And at Kua have been found Persian coins and bits of Iran­ian porcelain. There is another place on Pemba with the same characteristics.

On the island of Pate there are a few families who are said to have come from Persia. The Wagunia, who speak a Swahili dialect are said to be Persians from Kangoni, near Shiraz. And then there’s, the mitepe (the sailing boat made com­pletely from wood). The mitepe carries three pennants on its prow. One of these pennants is in honour of a Persian sultan who lived long ago in Shanganya (where Kismayu now stands). With all these facts, and many more, it’s not a wild surmise to say that Gedi might have been built by Persians. It’s worth work­ing on the assumption for a while, anyhow.

As for Wikipedia, it is widely accessible to ordinary individuals who are not renowned historians nor established prominent figure/s with any kind of affluence in the subject available at hand. 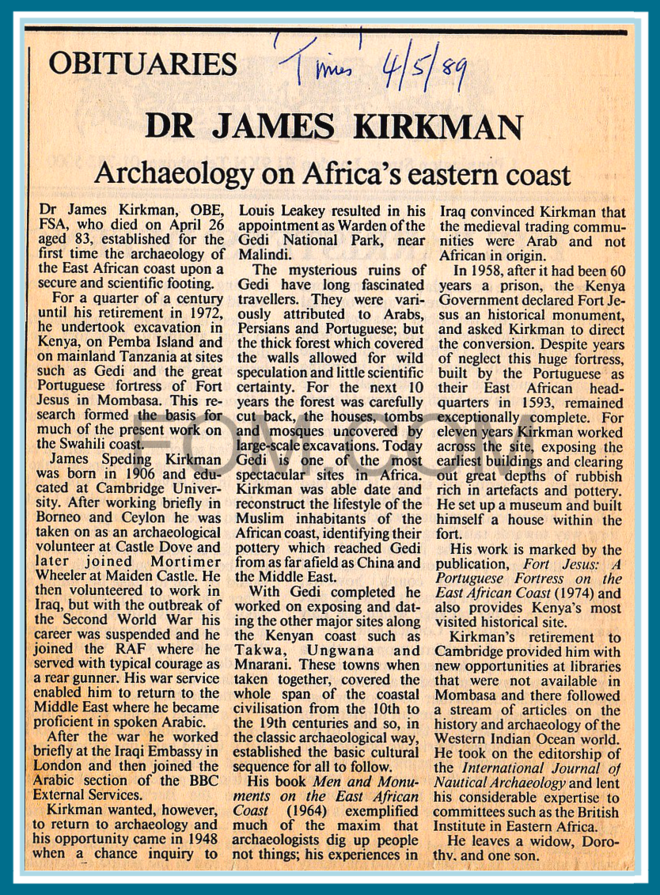 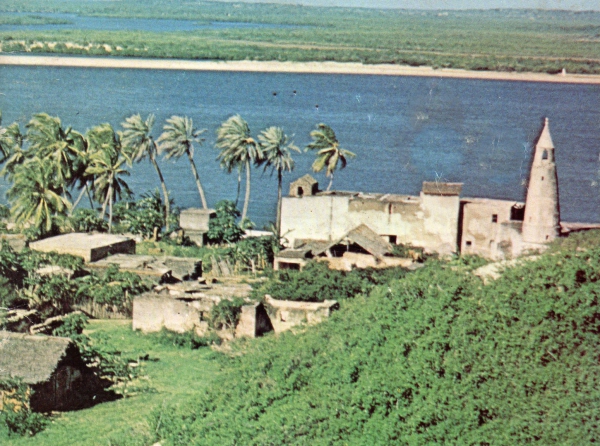 Shela, two miles from Lamu town, is an attractive small village in spite of having lost its prosperity. The origins of the town are obscure, but according to traditional history, when the town of Kitau on nearby Manda was sacked by the Sultan Omar of Pate in the middle of the 14th century, many of the inhabitants fled to Lamu. They remained there for about 200 years, living socially apart from the Lamu people. Eventually, the Kitau refugees asked permission from the Sheikh of Lamu to build their own town. The Sheikh agreed, provided that no tall stone buildings nor a wall around the town be erected which might in the future lead to Shela becoming a rival to Lamu town and thus a security risk. In the latter part of the 16th century, the building of the town of Shela began.

Shela reached her apogee during the nineteenth century, especially from 1829 to 1857, during which period five of the town’s six mosques were constructed. Most of the inhabitants then were Arabs who held large plantations on Manda island, Mkunumbi, Pangani, and Kipini. Shela was much larger than today, and her stone buildings were spread almost to the present Lamu Ginners. When the slaves began to leave the Lamu area around 1890, the Arabs’ plantations rapidly declined since there was no one to work on them. Many of the Arabs themselves left the town of Shela to take up business or employment in Mombasa.

Today Shela has fewer than 250 people, most of whom are Bajun fishermen and farmers who cultivate small plots behind the village. There are few men between the ages of 20 and 50 because most have gone down to Mombasa to get jobs; many of them can be seen selling vegetables and fruits at the Mackinnon Road market in central Mombasa. Of the 100 stone buildings still standing in Shela in 1969, over 40 were unoccupied. Some of the inhabitants have used the walls of them to support new mud-and-wattle houses, but sometimes there is not even enough money to purchase a new makuti roof. But these impoverished people still have a feeling for the architecture that they can no longer reproduce: they support their simple houses against the most ornately plastered walls. Shela has a further difficulty in that sand dunes during the past 80 years have been encroaching and are gradually covering many of the fine old buildings.

Aesthetically, Shela is one of the most attractive villages in Kenya. The decorative plaster work found in the old houses is some of the finest seen on the coast; unfortunately, nobody does this kind of work anymore and so what remains has become invaluable. The Friday mosque is the highlight of any visit to Shela. It was built in 1829, and unlike most mosques on the coast it boasts a minaret. Henry Burnier, who was a longtime resident of Shela living in part of what is now Peponi Hotel, supervised and paid for the restoration of the Friday mosque in 1948. The best place from which to view the mosque is on top of the sand dunes where one can get a magnificent sight of Manda island and the Lamu coast in the background with perhaps a glimpse of a dhow sailing gracefully past Shela.

One curious piece of information told by an old man in Shela is that when he was a young boy the people of Shela always removed their sandals before going into Lamu town to show their respect for the people of the older town. Although this is no longer done, the Lamuans still believe that the inhabitants of Shela are “upstarts.”

Opposite Shela on Manda island at a place called Kitau is a block house where several cannons rest undis­turbed in the surrounding sand. These cannons were made in Scotland in 1813. The block house was probably built at the same time as the Lamu fort to protect the entrance to Lamu harbour.